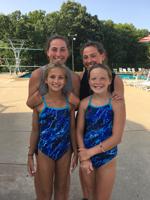 Alberta began diving at the age of 9.  From the age of eleven to fifteen she qualified for ten National Championships on both three meter and on meter springboards.   She competed in high school diving from 2011-2015 and qualified for State Championships all 4 years.  She was Conference Champion 2 consecutive years.  Alberta has been the co-head coach of the Old Pike Dive Team for the past 5 years and has previously coached for the Twister Dive program for 2 years.  She is currently attending the University of Missouri pursuing a BA in Sports Journalism.

Hannah also grew up diving for the Twisters dive team and qualified for 10 National Championships on both the 1 meter and 3 meter springboards.  In high school, Hannah qualified for state 3 times and finaled twice.  Hannah has been co-head coach for Old Pike for 5 years and previously coached for the Twisters for 2 years.  Hannah is currently pursuing a BS in statistics at the University of Missouri.

Chad has also taken great pride in coaching a large number of male and female swimmers and divers every year at the Missouri State High School Swimming and Diving Championships. Swimmers he has worked with and coached have consistently placed in the top 16 year after year ever since arriving in Kansas City in 2008.

Chad has a bachelor’s of science degree in K-12 physical education, health  and coaching from Northwest Missouri State University and a master’s degree in Athletic Administration and an Education Specialists degree from William Woods University. Chad has a 12 year son Landon and resides in Gladstone.

Tim has over 22 years of tennis industry experience. While in high school, he competed at the varsity level (#1-2) all four years. He participated and captained two elite-eight teams and advanced to the state tournament his senior year. He then competed for NCAA Division I University of Northern Iowa Mens Tennis Team for four years, earning a varsity letter Soph-Senior seasons. Tim became the head tennis director at Bowman Woods Swim & Racquet Club in 1996 and directed the tennis program until graduating from the University of Northern Iowa in 2002.

While student teaching, he was also an assistant tennis professional at Westfield Tennis Club in Cedar Rapids, Iowa. He is currently a 6th grade mathematics teacher at Plaza Middle School in the Park Hill School District. He has taught
at Midtown Tennis Club (now Genesis) in Overland Park, Kansas and Clayview Country Club in Liberty, Missouri. Tim earned the United States Tennis Association Heart of America Community Service Award and was named Outstanding High School Coach of the Year in the Heart of America Section. He also coaches the Park Hill High School mens and womens tennis teams.

Interested in becoming a sponsor of Old Pike Country Club?

Locally Owned and Operated for over 30 years!